To go along with the release of Haxe 4.0.0-rc.2, we’ve just released version 2.8.0 of the Haxe extension for Visual Studio Code. The full changelog is here.

The first thing you’re probably going to notice is the update notification for the rc.2 release:

Vshaxe 2.8.0 also updates the eval debugger introduced in 2.6.0 to be compatible with rc.2 (it’s no longer compatible with rc.1 or earlier!). Thanks to @Simn’s efforts, there have been major improvements to the debugging experience, such as:

Another major improvement that’s worth mentioning: parser errors are now shown in diagnostics. Technically this was already part of vshaxe 2.7.0, but required Haxe dev to come into effect. 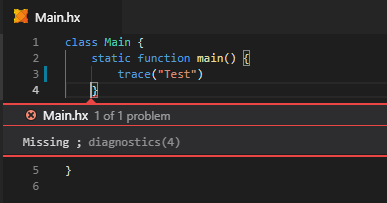 I can’t count the number of times I’ve hit “compile” only to have the compiler yelling at me about a missing semicolon. With auto-save and diagnostics you easily get into the mind-set of “if nothing is red, it should compile”, but that just wasn’t true for parser errors. No longer!

Note that there’s still a category of errors that are not shown in diagnostics, but this should happen less frequently. There are plans to improve this.

Similarly, Haxe 4.0.0-rc.2 improved the ranges on some errors. Previously you would often see entire switches being marked red: 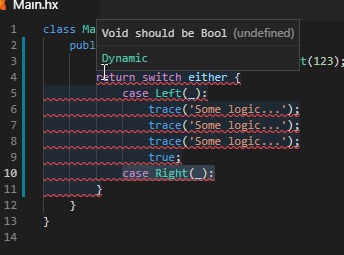 Instead, only the offending case is now highlighted: 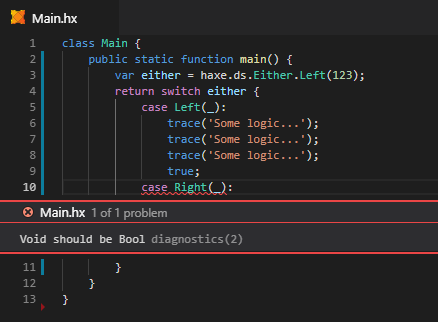 Finally, postfix for-loop generation is no longer hardcoded to a few specific types (Array, Map) with rc.2, meaning it works with custom types that implement iterator() or keyValueIterator()!

PS.: vshaxe is about to hit 100k downloads at the time of writing.

I have question about “parser errors are now shown in diagnostics” . It’s still need to save ( or set to auto-save) file to show the error , right ? Is it possible to show error without save (similar to Eclipse IDE at example ) ?
Also I tried Quick Fix … ( Ctrl + . ) , but show “No code actions available” . Do you planning to add “Quick Fix…” ?

That’s correct, diagnostics are still updated on save only right now.

There’s a number of quick fixes / code actions available, even long before this release. What’s new is support for the new “Auto Fix” command. Are you sure the cursor was in a location where one of these code actions was applicable?

Well, my test example is simple

So the error is missing semicolon after trace and Ctrl + . do not show anything.

Yes, there is no quick fix for missing semicolons right now. Only an error diagnostic.

I can’t count the number of times I’ve hit “compile” only to have the compiler yelling at me about a missing semicolon.

Awesome! I’ve wanted this. These are great improvements!