Here’s a thread for organizing thoughts on how to set up the forum.

I added a welcome post, and some basic forum posting guidelines. Am I missing anything?

I like the categories feature. We can set special flags for certain specific topics. I added some for “Macros” and “Job Postings”. Any other thoughts?

Super cool. Thank you for the starting this community!
Here is my suggestions:

@dmitryhryppa what kind of topics would there be in the “for beginners” category?

@ibilon, some simple questions, about how to install Haxe, with which library to start, where to use Haxe and so on.
It is only suggestion and not necessary category, but here is an example:
https://www.gamedev.net/forums/forum/71-for-beginners/

Howdy all - yes much nicer having the forums here! Google groups is buggy and ugly! I would suggest also when someone does use google groups to redirect them here - there could be an issue with having to look in two places for things

@Michael it is now activated on the Uncategorized, Macros and For beginners categories.

And change the name of the mail sender 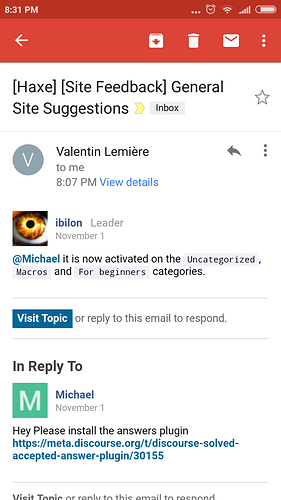 I think that’s just because I’m the one who mentioned you.

There is an “uncategorized” category. I suggest to change the name to something that is more inviting for off topic conversation.
Or better yet - make a dedicated category for social conversations. This can really build the community.

Threads and posts aren’t properly marked as read when I visit them. I do have this problem only on this discourse instance, not on the other 3 I am visiting regularly.

I’ve already cross checked configuration but can’t find anything in this regard.

Also I’ve observed, that sometimes the blue markers beneath a post slowly vanish and when I go back then, a post is read properly. But most of the times the dots just stay, and when they stay, the discourse scrollbar doesn’t move at well. It then sticks to the first unread post, regardless of scrolling. Since nothing is marked as read, I will enter the thread at the same post each time after leaving until it I manage to hit it in a working moment (which happens in less than 10%).

@NobbZ
I can confirm that. I have the same issue.

I’m also having the same issue as @NobbZ : \

Admins? Anything you can do about this problem? It makes the forum close to unusable…

Same here. Maybe we should contact Discourse staff about that…

I’ve no problem on other discourse instances, therefore I think it is related to this instance configuration or database.

Well yeah but it’s a fresh set up on Discourse servers AFAIK. I wonder if it’s somehow related to the custom theme? (e.g. the js thing doesn’t handle the scrolling down properly because of some css rule or something). @ibilon?

I’ll try to find which rule break it.

@ibilon, thank you. That helped.

Haxe highlightsing? Would be great