Vshaxe: Completion is very slow due to @diagnostics and @statistics (?)

This is a repost of an issue I’ve posted on the vshaxe github (Completion is very slow due to @diagnostics and @statistics (?) · Issue #461 · vshaxe/vshaxe · GitHub). I hope that’s okay here. Maybe somebody here dealt with a similar problem and not monitoring vshaxe issues on github.

Completion was absolutely fine previously but looks like something has happened after updating to the newest Haxe and OpenFL versions. In an OpenFL project with a few custom classes completion takes up to 10s sometimes.

I have "haxe.enableServerView": true in my configuration. display/completion shows very much acceptable time (tens of milliseconds) as well as the most of other items of the “Methods” list. However there are two items that seem to be very slow: @diagnostics and @statistics . The first one sometimes takes up to 5 seconds and the second one up to 7+. 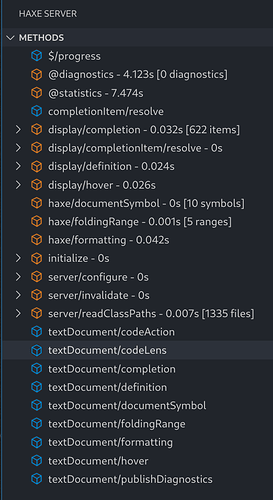 What are these and what can I do to speed things up?