Support for typescript extern file and split file for class

Hi,
There Is a roaadmap for supporto export import class in es6 with file split for classe. And and idea for a new target that emit code with file .d.ts?

I believe there is support for es6 since haxe 4.0.5 development.
-D js-es=6
(https://github.com/HaxeFoundation/haxe/commit/406d3fb2bfb4016b384082768182a3d470633ed8 )
Support for ts is via haxelib.
https://github.com/elsassph/hxtsdgen
Pretty sure these are not perfect but I thought that OpenFL uses them to provide wider support, although they may manually also patch.
I don’t think there is any timescale attached they will mature with every new pull, but they are probably quite usable given some care?

I was hoping to eventually see this in Haxe but the issue tracking this was unfortunately closed recently: JS Code Splitting / Reloading · Issue #5831 · HaxeFoundation/haxe · GitHub
I experimented doing this in a custom generator:
GitHub - benmerckx/genes: Generates split ES6 modules and Typescript definitions from Haxe modules.
There’s also hxgenjs which has been around longer, although the typings are more basic (defaulting to “any”):
GitHub - kevinresol/hxgenjs: Extensible JS generator for Haxe
If it doesn’t find its way into the Haxe compiler you could go all the way and implement it as a compiler plugin.

In genes I managed to only recompile files when needed if you’re using a completion server. Full compile: 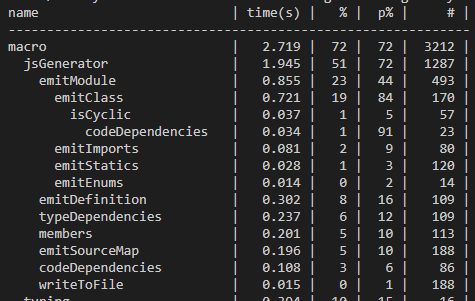 But in your project you do also the split of js files for class?