I have started a video series on YouTube introducing my upcoming video game being developed in Haxe/Kha, and starting with Week #1 of programming, will go through updating the progress of the game on a weekly/monthly basis.

Planned Features for the game include:

Due to the size of the game, we will begin by releasing Content Patches, starting with two zones and expanding the game as necessary.

There is planned to have a total of four Content Patches for the first iteration of the game’s lifecycle, starting the story and setting the scene.

The base game, “The Bluest of Blues”, starts in the town of Sakooisi and will have one explorable area: Blue Dream Forest.

From there, we wish to expand into a total of eight explorable zones, including learning about the Dookians and their hometown, Tama Sa Dooki, the mysteries of the Elemental Gods and their silence in the ethereal realms by exploring Mount Kazzir, the Caves of Saqi and Tempest Oasis. And finally, learn of Azeki, the main protagonist, who, by learning of collecting the soul fragments of the creature, Shadowlight, is at a personal dilemma in determining the root cause of Shadowlight’s destruction among the people of the Anji and the creatures’ true intentions.

Our first programming session is also up and on YouTube for people to follow along the analysis of how the game is being made and the thought process: Seriously? Just a Fix, Really! - Week #1 Programming - YouTube

We also have a Discord channel if you wish to join us: StoryDev

Some work and progress on the Meditation Sessions: 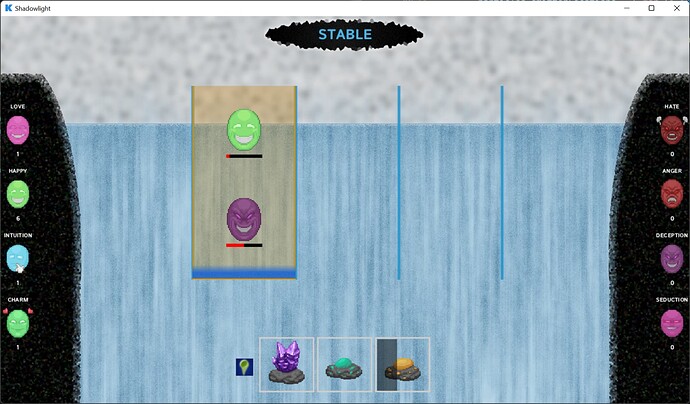 Full graphics, crystals now do things other than just statically increasing/decreasing the energy of emotions and some bug fixes.

The final result from this week’s programming session: 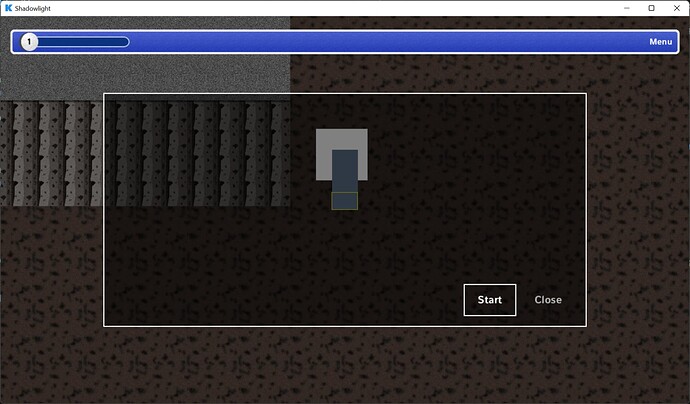 It looks like nothing much is happening, but eventually this interface will have options to select crystals from your inventory, select difficulty and determine strategy for beating the meditation session for any given meditation spot.

We all know it. You know what it’s about. It’s happening in front of our eyes and we can feel the tremors, the heat and the sun being blocked. Black clouds rise above the horizon and the air feels dense. Unpleasant sounds are being heard and the desperate screams of children as they flee their homeland.

Somehow, we carry on, but without a flinch or hesitation that in each of us we remain strong, determined, willing.

Yes, you know of which I speak.

The sound of thunder and war comes to the world once again, but with how much time left we have to enjoy the comforts of home before it hits ground, is unpredictable.

To add poison to a fresh wound, Shadowlight will not be the video game we wanted to make. It will instead be a quick effort. Most of the features we wanted to bring to this game will not be accomplished. There isn’t enough time.

What has been put into the game will remain, such as the Meditation Sessions, and the idea of crystal crafting and crystals. The idea of exploring a vast world, completing puzzles and progressing a story, on the other hand, will be simplified significantly.

This will likely become an interactive story, much like how Age of Atlantis (our previous announcement) was going to be, but with the added Meditation Sessions. As the primary gameplay mechanics, we hope the story will be enjoyable enough to keep you playing.

This decision is not being made lightly. With everyone with a ticking bomb in the backs of their subconscious, we do not expect our video game to receive a crowdfund at this point.

We apologise in advance for anyone who was excited to see an ever-expanding story, with detailed top-down semi-realistic graphics and a game designed to make you think. But, upon reflection, we think this decision is the only feasible way to accomplish this game in a short space of time.

Meditation Sessions will exist in their ever-expanding form with more crystals to come. Collecting crystals or minerals will no longer be a feature, but you will instead acquire raw resources from Meditations, dependent on progress, difficulty level chosen and the type of meditation session.

Due to these changes, our Monthly Update, due on 5th March, will discuss these in further detail as well as briefly explain the reasons behind it. Our weekly programming sessions will continue to exist, and they will no longer be hidden behind a Patreon paywall.

Additionally, the final game will be free. It seems unfair to suggest that after reducing down on all these planned features that the final game should be a pay-for product. We think, based on world events and a desire to simply make a name for ourselves, that the best thing for Shadowlight and future endeavours (if they even become a thing) will be to make them free, open source and payment optional.

Of course, if you believe in free and you still wish to help support us, we will keep our Patreon page open for people who are interested and wish to help development or simply as a kind gesture.

We hope you understand this decision and progress on our new website and Shadowlight will continue with all these commitments in mind.