How to exclude folder from classpath with the HXML include macro? (SOLVED)

I have a classpath folder structure that looks like this:

And I’m trying to create a client.hxml, which only compiles classes in the client and shared folders.

However building this, it would appear as if the ignore parameter of include() has no effect.
I tested it by making a class in client use a class from the server package, and the whole thing compiled without errors with the server class ending up in the output file. I do not want this to be possible.

Changing it to this:

Gives an error similar to:

Which I’m assuming happens because it can no longer resolve package client.foo.bar since its top-level is now the src/client folder?

So how should I go about doing this? Is there some better practice to achieve a similar project structure that I’m not following?

So if you want to include all from the client and shared packages you can do:

The calls adds to each other so it’s fine to have multiple of them.

Thank you for the suggestion. I tested it out and unfortunately it didn’t work.
As you can see in the following screenshot, both of the other packages ended up in the compiled output file, despite not being included in the hxml… 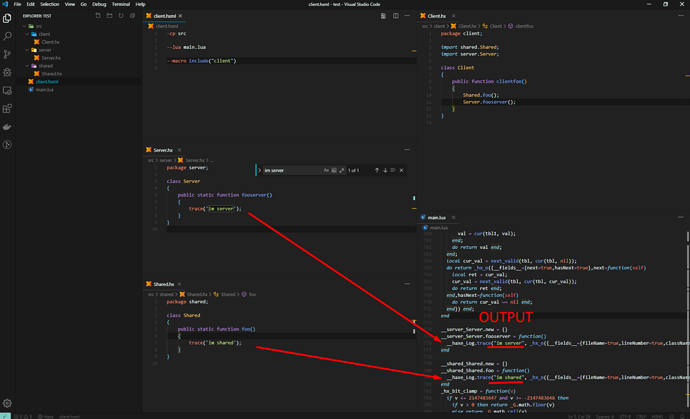 What I want is for the server folder to basically not exist when building client.hxml, referencing any of its classes should result in an error.

You use them so they have to be included.

In that case I’d do this

That way you won’t have access to the server package at all.

You use them so they have to be included.

Ye the point of it was that I or the editor extension would be prevented from accidentally importing them and giving them as suggestions or putting them in the output.

I will do it the way you recommended, thank you