Maybe not everybody here knows about them: the Haxe Roundups is a series of weekly post about what’s been happening in the Haxe world written by @skial.

They are an awesome way to keep up to date and learn about libraries/projects and events.

And there’s a new one just out: 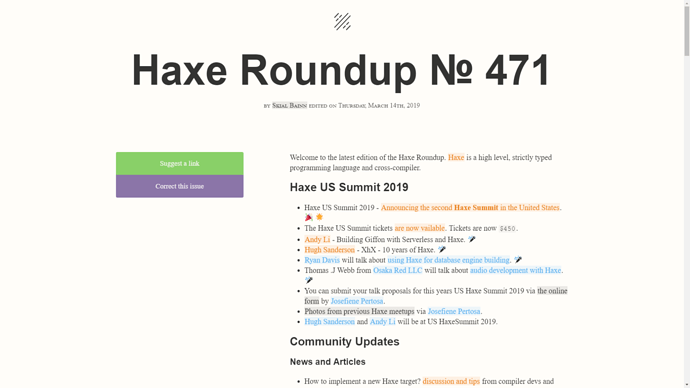 To know about the next one there’s a rss feed or you can follow him on twitter.
If you have a link for the post you can suggest it on github.

@skial Thanks a lot for those!

Thanks @ibilon for the shout out

. A big thanks goes out to Alexander Hohlov for sourcing so much content these last few months!

I love haxe.io, I have checked it every week since I discovered it last year. Bravo on the great idea.

The Haxe Roundups are excellent. Thanks so much, @skial !

Maybe it would be nice to have haxe.io as Community Roundups in the Connect section?

I just found out about those recently, they are really nice to have around!

Yes haxe.io is awesome and essential !
I dare a suggestion : more pictures/screenshots/photos would be nice !