I have followed all the guides to install Haxe and HashLink on windows, but I have noticed lately than the lastest version of Hashlink work only with haxe 4+. I would like to choose which version of hashlink to launch my haxe apps.
If it’s not possible how changes the version installed in visual studio.

According to GitHub - HaxeFoundation/haxe: Haxe - The Cross-Platform Toolkit it seems that for haxe 3.4 you need hashlink 1.1.

Since I don’t think you can easily have two version installed, you should uninstall you current version of hashlink and install 1.1.

I don’t think you can easily have two version installed

Since there is no installer involved, you can just put different versions in separate folders.

I use this structure: 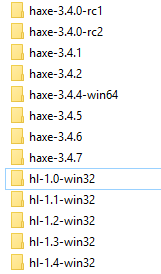 I have done that .

But in visual studio code, when I execute task with Hashlink(launch) after generate the app.hl , I get

how do you uninstall or change path for visual studio code. I mean a specific path is used, because the command

With hl.sln your are only compiling it, I don’t think that it install it, so you’ll need to add it to your path.
Not familiar with windows so can’t help you with that.

You could try the precompiled version Release HashLink 1.1 · HaxeFoundation/hashlink · GitHub if you have issue with compiling.