I’ve posted this once or twice before, but this was on the OpenFL forums. I have been working on a story development tool for Haxe for a long time now, which would allow you to write interactive non-linear stories within any context.

The idea behind StoryDev is to be as simple as possible while providing you with an easy tool to translate story into any game engine. It has no dependencies and can be integrated into your code base in very few lines:

The following is an excerpt from my own interactive story currently being created:

As you can see, the idea is to be as simple as possible. It’s designed to be easy for both a screenplay writer and game developer who can communicate the story effectively in a video game using any library.

All full README is available on the GitHub project which you can use. Any help or feedback using this library, post here and I will do my best to support.

StoryDev, a project that has been mostly a scripting engine, has now got its own editor, meaning you can now design and develop video games with comprehensive story editing tools. 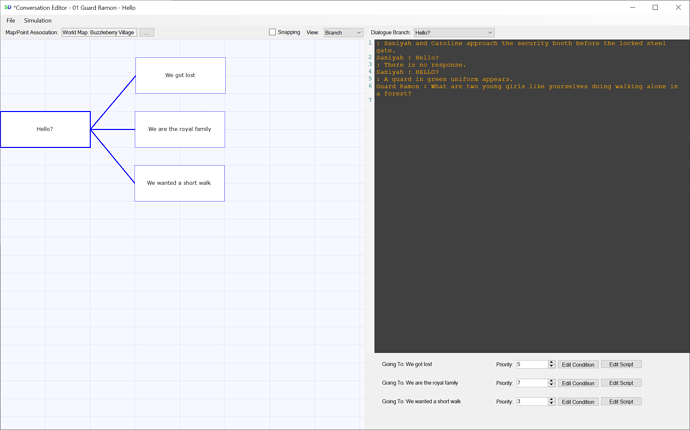 Official documentation has not been produced, but you can use the Twinspire StoryDev category on our website as a reference for understanding how the project has developed and how to use all of the features.

Note that this software is in Beta and some features may appear not to work as expected or some buttons may just not do anything at all.

I am happy to receive feedback on existing features.

You can browse and download the current project over on GitHub.